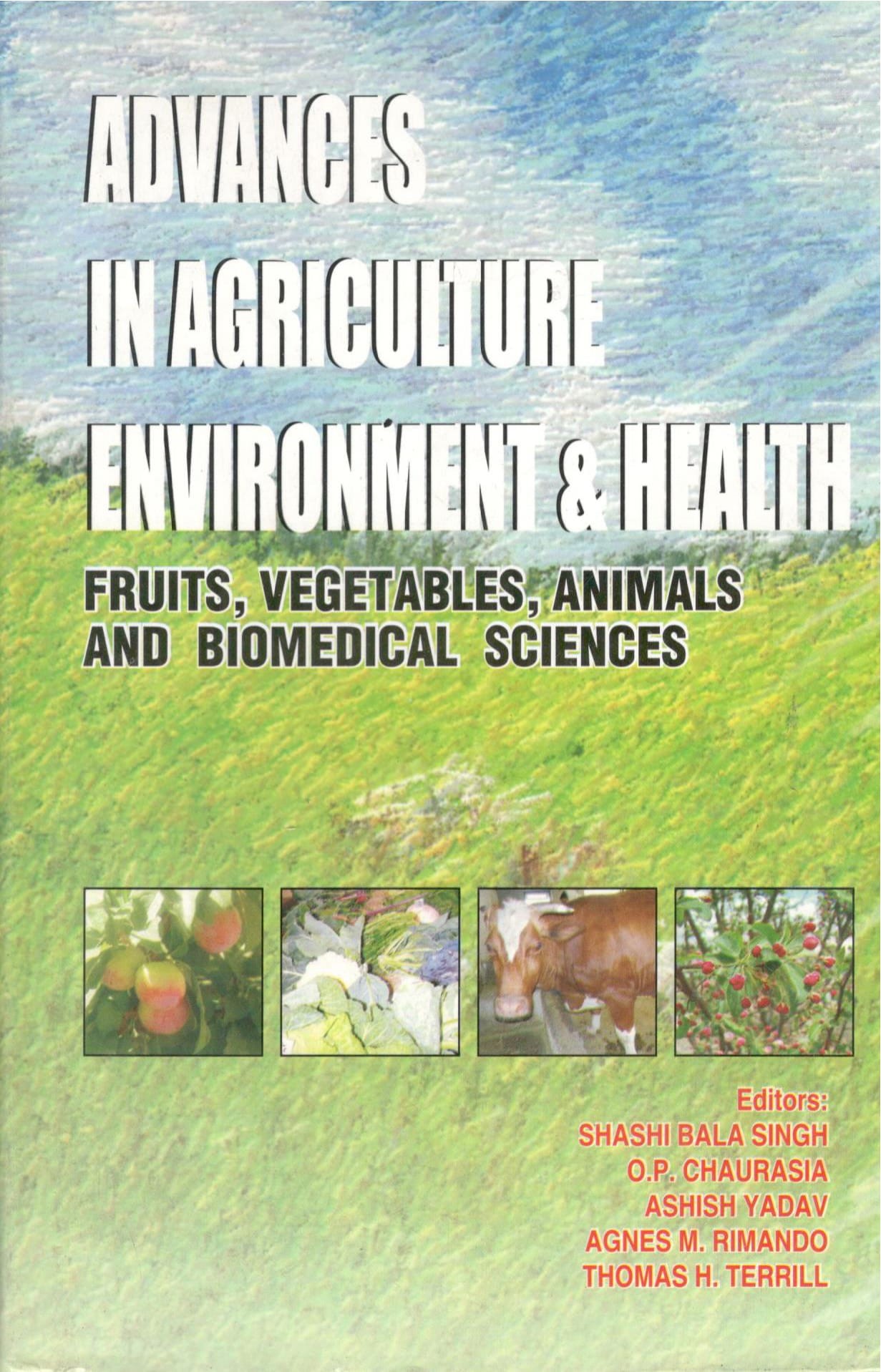 Indian agriculture has been in crisis for many years and the country is now facing high inflation and rising food prices. Food and health security is a crosscutting issue targeting the most food insecure areas. This book has compiled chapters that are imperative to meet the current and futuristic needs for sustainable agriculture, animal and health security. A multi-disciplinary group of eminent scientists from India and abroad have contributed chapters to bring out this vital book. Chapters deal with the various subject’s viz. exploitation of heterosis breeding to increase productivity, horticulture development in high altitudes, production of quality fruits by using phyto-hormones, sustainable fruits and vegetables production and it’s postharvest management. Some chapters also describe the researches on seabuckthorn and its sustainable resource management. Importance of medicinal plant biodiversity of trans Himalaya, soil - water salinity and management options, carbon sequestration of orchards, stress induced changes in burley tobacco seed development, agriculture extension through local institutions and storage studies of biodiesel in cold desert has also been discussed. The importance of biotechnological approaches for enhancing crop productivity and sustainable agriculture has been emphasized. The unraveling of rice-wheat synteny using single copy genes, molecular biology of rutin biosynthesis in buck wheat, development of short duration quality protein maize hybrids, and molecular characterization of indigenous crops of Ladakh has been elaborated. The sustainable fodder production for livestock, strategies for poultry production, broiler rabbit as a source of meat & fur, and fisheries potential in high altitudes has been presented in detail. The book also deals with biomedical aspects viz. bio-medical systems and products for high altitude applications, endothelin-1 and high altitude pulmonary hypertension, hypoxic trainings and essential hypertension, genetics of high altitude pulmonary hypertension and adaptation and mal-adaptation to ambient hypoxia.

Shashi Bala Singh is the Director, Defence Institute of High Altitude Research, DRDO, Leh-Ladakh, India. She obtained her Ph.D. in Physiology from All India Institute of Medical Sciences (AIIMS), Delhi in 1986. She joined DRDO at Defence Institute of Physiology & Allied Sciences, Delhi in 1990 and has vast experience in the field of high altitude human physiology. She has made excellent contributions in the field of Neurosciences. She took up the challenge to find out the solution to the problem of hypophagia and cognitive functions impairment at high altitude. Her work has led to the elucidation of some basic mechanisms involved in hypophagia at high altitude in terms of taste receptor sensitivity changes. The impairment in cognitive functions is mainly due to the oxidative stress leading to neuro-degeneration in brain structure involved in learning and memory. She is the life member of International Brain Research Organization (IBRO), Association of Physiologist and Pharmacologists of India (APPI), Physiological Society of India (PSI), and Indian Academic of Neuroscience. She is the fellow of Indian Association of Biomedical Scientist (FIABMS) and Indian Academy of Neuroscience (IAN). She has over 60 publications to her credit in reputed international and national journals. Shashi Bala Singh is the recipient of several awards and honours viz. Dr. J.N. Maitra Memorial Oration award in 2003, Bharat Nirman Talented Ladies award in 1995, DRDO Laboratory Scientist of the year award in 2006, Surg Rear Admiral M.S. Malhotra Prize in 2007 and Prof. Baldev Singh Oration award in 2007. Recently she has received DRDO Technology Spin Off Award -2007 from Prime Minister of India in May 2008.

Om Prakash Chaurasia obtained his Ph. D. degree in Botany from Magadh University Bodh Gaya, Bihar in 1992. He has joined DRDO in 1993 and posted in Defence Institute of High Altitude Research (DRDO), Leh (formerly Field Research Laboratory). He has also worked on flora of Andaman & Nicobar Islands. He has extensively surveyed trans Himalayan belts of Ladakh and Lahaul-Spiti and documented the fragile plant biodiversity and its ethnobotanical wealth. He has developed certain herbal products using high altitude plants. He has 05 patents, published 40 research papers in various national & international journals and authored books on Cold Desert Plants in 05 volumes and Ethnobotany & Plants of trans Himalaya. Presently he is working as Scientist ‘E’ in this institute and is actively engaged in R & D on various aspects on medicinal & aromatic plants of trans Himalayan region. He is life member of Journal of Plant Genetic Resources, Society of Ethnobotany, and Hill Horticulture and Development Society.

Agnes M. Rimando is a Research Chemist with the United States Department of Agriculture, Agricultural Research Service, Natural Products Utilization Research Unit in Oxford, Mississippi, U.S.A. Born in the Philippines, she obtained her Ph.D. degree in Pharmacognosy (core natural products chemistry) from the University of Illinois at Chicago in 1993. To date, she has more than 100 publications, including 5 patents. She is editor or co-editor of 3 American Chemical Society (ACS) Symposium Series books and a guest editor of a special issue of the journal Molecular Nutrition and Food Research, volume 52(S1), 2008. She is in the editorial board of two scientific journals. Agnes Rimando has been active with the Agricultural and Food Chemistry Division (AGFD) of the ACS, and has served in various official positions, including Chair of AGFD in 2007. She is Chair of the American Chemical Society, Olemiss Local Section for 2008.

Thomas H. Terrill has been a Research Professional at Fort Valley State University (FVSU) since 1992. He is author and/or coauthor of over 35 refereed journal articles, numerous proceedings papers and abstracts and 1 book chapter. He is the coordinator for the Southern Consortium on Small Ruminant Parasite Control and a research collaborator with a number of national and international institutions/agencies in the southern USA, Puerto Rico, the US Virgin Islands, and South Africa. He is a member of several professional organizations and is currently serving as an Associate Editor for Agronomy Journal and as Editor of the American Forage and Grassland Council monthly publication Forage Progress. He is the FVSU technical representative for the USDA Western Regional Project W-102, “Integrated methods of parasite control for improved livestock nutrition”. His teaching assignments include graduate courses in the Animal Science Master’s program at FVSU. He is Principal Investigator for a number of grants supporting research in alternative forages for goats and epidemiology and control of small ruminant nematode parasites. His research is focused on development of year-round goat grazing systems, epidemiology and anthelmintic resistance of gastrointestinal nematodes, and use of novel, non-chemical parasitic nematode control methods, including nematode-trapping fungi, copper oxide wire particles, and condensed tannin (CT)-containing forages. His particular area of expertise is CT analysis methodology and evaluation of CT-containing forages in ruminant diets.