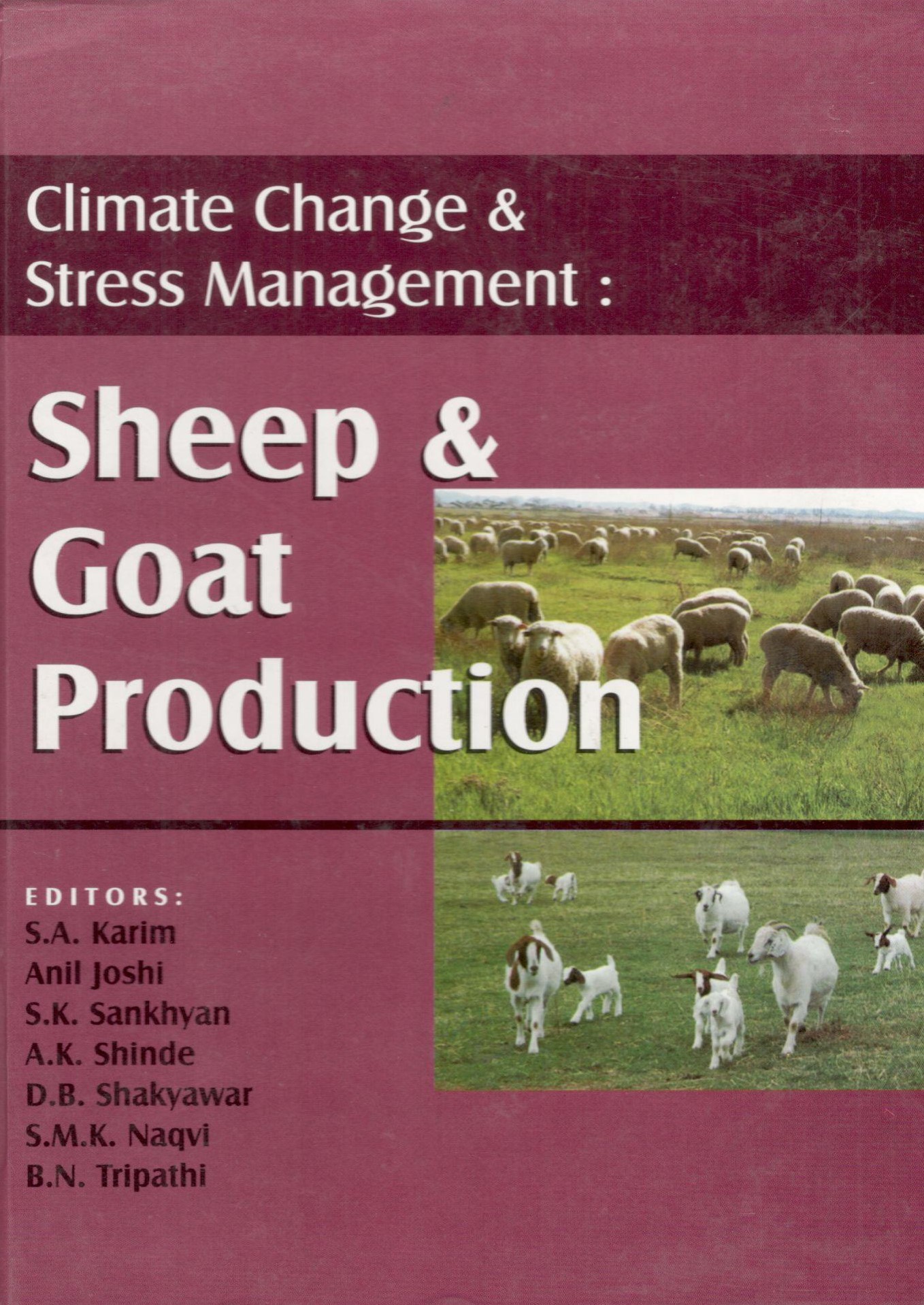 Sheep and goat rearing is a traditional occupation of small, marginal farmers and landless labourers in semiarid, arid, hilly and mountain regions of the country, inhospitable to conventional crop cultivation. Small ruminants produce food and fibre at relatively low cost from feed materials from land that often cannot be used for conventional crop production. Higher production efficiency of the two species is not only due to their ability to sustain on sparse vegetation of degraded rangeland and efficient utilization of top feed resources but also early puberty, short gestation period, high prolificacy, rapid growth rate, quality meat, milk and carpet wool production and good marketability.

Small ruminants are primarily raised on grazing resources under extensive range management in different parts of the country. They are exposed to wide range of stresses under field existence mainly thermal, nutritional, exercise, management, disease, predation etc. These stresses redistribute the body resources including protein and energy at the cost of decreased growth, reproduction, production and health. In prevailing situation of progressive shrinkage of grazing resources, under nourishment, climate change reflected in low precipitation, feed and water scarcity, inhumane transportation, handling and slaughter practices, frequent drought and famine, long distance migration, poor en route shelter, early disposal of lambs and distress sale of animals are some of the important issues causing stresses on the small ruminants and affecting their productions.

Further there is need to address the small ruminant production under the present scenario of climate change and crunch in feed resource which is having adverse effect on production, reproduction and health status.

The present book is outcomes of the series of lectures delivered by the experts during the National Seminar on the basis of their vast experience of the subject and recent advances on stress management on small ruminant production and product processing. It covers broad areas on small ruminant nutrition, breeding reproduction health marketing processing and value addition with reference to climate change and stress management.

Dr. S.A. Karim, Director. Central Sheep and Wool Research Institute, Avikanagar, completed his B.V.Sc. & A.H. and M.V.Sc. (Animal Nutrition) from Orissa Veterinary College Bhubneshwar in the year of 1974 and 1976, respectively. He was awarded University Gold Medal for securing first position in M.V.Sc.(AN). He completed in Ph.D. degree in Animal Nutrition from National Dairy Research Institute, Karnal in the year of 1991. He joined Agriculture Research Service(ARS) in 1978. He has more than 26 year of research experience in the filed of ruminant nutrition with specialization in nutrition-environment interaction, growth maximization of labms, range managed small ruminants’ nutrition and carcass evaluation. He has published 140 research papers, 45 invited papers, 15 popular articles and 200 contributory papers. He has guided several Ph.D. students. He is a member of several important academic bodies and as Board of Studies, Academic council, Research Advisory committee.

Dr Anil Joshi joined Industrial Toxicology Research Centre (ITRC), Lucknow in 1979 as a CSIR Research Fellow and was awarded PhD in 1984 in Biochemistry from Lucknow University for his work done at ITRC. He did his Post Doctoral Research work in ITRC from 1984 to 1986. He joined Central Sheep and Wool Research Institute, Avikanagar as Scientist S-1 (Animal Biochemistry) in 1986 and is Principal Scientist since July 2006. His significant research achievements include development of protocols for ram semen freezing, validation of computer-aided semen analysis for ram semen evaluation during various stages of freezing, freezing of ovine embryos and was associated in development of laparoscope aided and transcervical artificial insemination techniques for using frozen ram semen. His group is credited to report for the first time research findings on the work done on prolific sheep and ram lambs of which 2 were published in “The Veterinary Record” and 1 each in “Animal Reproduction Science” and “Tropical Animal Health and Production”. He is twice recipient of ICAR Team Award for Outstanding Research for the Biennium 1997-98 and 2003-04 and also got ISCA, NAAS, ISSRF and ISSGPU awards for best paper presentation. He has published 81 papers in referred National and International and has contributed several papers in International and National Seminars. He is the Life Member of 7 Scientific Societies and the current Editor of the Indian Journal of Small Ruminants.

Dr. S. K. Sankhyan did his B.Sc. (Ag.)from University of Rajasthan in 1986, M.Sc. and Ph.D in Animal Nutrition from Himachal Pradesh Krishi Vishva Vidhyalaya, Palampur in 1988 and 1991 respectively. ; He was awarded University merit fellowship during M,.Sc. and Ph.D. programme. He joined Agricultural Research Services as Scientist in 1991 at Central Sheep and Wool Research Institute, Aviakanagar aind presently working as Principal Scientist and I/C Head Animal Nutrition. He has 18 year of research experience and pursued the research in the area of nutrition of sheep and goats on pasture and mineral nutrition of field animals for the last fifteen years. He is presently conducting research in AICRP on “Improvement of feed resources and its utilization in raising animal production” He has published 3 Books. 58 research papers in National and International Journals, 12 lead/invited papers and presented 54 abstract papers in National Seminar. He is life member of five National Societies of Animal Science.

Dr. A.K. Shinde did his M.V.Sc * AH and Ph.D. in Livestock Production and Management form College of Veterinary Science and Animal Husbandry, Jawaharlal Nehru Krishi Vishwa Vidhyalaya. Jabalpur in 1983 and 1996. He has started his academic career as Veterinary officer in Madhya Pradesh Dugdh Mahasangh, Ujjain. He joined Agricultural Research Services as Scientist in Indian Council of Agriculture Research in 1989 at Central Sheep and Wool Research Institute, Avikanagar and now holding the position of Pricipal Scientist. He pursued the research in the area of nutrition of sheep and goats on pasture and mineral nutrition of field animals for the last seventeen years. He has published 50 research papers in National and International Journals, two Books, four technical bulletins, presented 54 abstract papers and 10 invited papers in National and Internationals Seminars. He has also written a book on “ Applied Animal Husbandry” in Hindi and contributed chapters in books published by Indian Publishers. He is life members of four National Societies of Animal Science. Recently he has received Dr Rajendra Prasad Award for technical book in Hindi from ICAR. New Delhi and Rajiv Gandhi Rashtriya Gyan Vigyan Molik Pustak Lekhan Puruskar Yojna from Ministry of Home Affair, New Delhi.

Dr DB Shakyawar obtained his graduation degree in Textile Technology from Kanpur University. He has completed his M Tech and PhD from IIT Delhi in Textile Engineering. He started his career as Lecturer at Government Polytechnic, Kanpur. Later he joined Agricultural Research Services in 1992 as Scientist. Presently he is working as Senior Scientist in Textile Manufacturing. Processing of angora and pashmina wool, manufacturing of shawl, non-woven felt and carpet, quality evaluation and application of computer in wool technology, are research area of his interest. He has published 50 research papers in various research journals. He was also awarded CSIR Senior Research Fellowship for his Ph.D work. Presently he is Co-principal Investigator of National Agricultural Innovation Project on “Value Chain on enhancing productivity and profitability of Pashmina Fibre”.

Dr SMK Naqvi is Principal Scientist and Head, Division of Physiology and Biochemistry at central Sheep and Wool Research Institute, Avikangar.Dr. Naqvi had an illustrious academic carrier and obtained his Ph.D. in Animal Physiology from National Dairy Research Institute in 1988. He has more than 25 years of research experience and worked on different aspects of Adaptation Physiology , Reproduction and Embryo Biotechnology. He has been trained at CCMB, Hyderabad; BARC,Mumbai and also visited Ag-Research, New Zealand. He has carried out several internal and externally funded research programmes. He was first to report in the country in 1991, production of large number of sheep and goat embryos through IVM-IVF-IVC. The birth of first lamb in the country from frozen-thawed embryo was also achieved under his leadership in January,1998. He was also credited with the birth of first full term lamb following transfer of embryo produced through IVM-IVF-IVC in 1999. Dr Naqvi and his team have produced 240 elite lambs through ETT and cryoconserved 263 embryos of various sheep breeds. He is a recipient of several prestigious awards and honours during his academic and research career, of which most significant are from ICAR,ISCA and ASC. He was awarded twice “ICAR award for Outstanding Team Research”, first as a Team Leader in the biennium 1997-98 for contribution in the field of Small Ruminant Production and secondly as an associate for contribution in the field of Genetic improvement of Sheep in the biennium 2003-04. He is also recipient of Dr D.N Mullick Memorial Award (2006-07) given by the society of Animal Physiologist of India. Dr. Naqvi has 211 publications to his credit of which 95 research papers have been published in referred National and International journals.Dr Naqvi and his team have filed two patents through ICAR. Two records of their work were published in the Limca Book of Records (India).

Dr B.N.Tripathi, MVSc, PhD, DICVP, is Principal Scientist and Head of the Division of Animal Health, Central Sheep and Wool Research Institute, Avikanagar. Before joining at CSWRI, Avikanagar, Dr Tripathi has served in various capacities at Division of Pathology, Indian Veterinary research institute, Izatnagar for about 19 years (post-doctoral). He has been the faculty member of the pathology discipline for over 15 years and guided 8 postgraduate students. He has published more than 80 research and review papers in national and international journals of repute. He has authored two books, one manual, edited two conference proceedings and has organized one national seminar. His major area of research has been the molecular pathogenesis and diagnosis of infectious diseases of ruminants with special interest on paratuberculosis. Dr Tripathi has visited a number of countries including UK, Denmark, France, Belgium Austria and Japan for advanced trainings and for attending conferences. He has received a number of awards including best poster presentation award, best paper awards of IAVP, best PhD thesis award for his student, Drs Jain and Vegad outstanding pathologist award, International Wellcome Trust Fellowship (London), etc. He has been conferred with fellowships of Society for Immunology and Immunopathology (SIIP), National Academy of Veterinary Sciences (NAVS) and Indian Association of Veterinary Pathologists (IAVP). Dr Tripathi is the Chief Editor of Indian Journal of Veterinary Pathology and IAVP Newsletter, The Lesion from 2008.