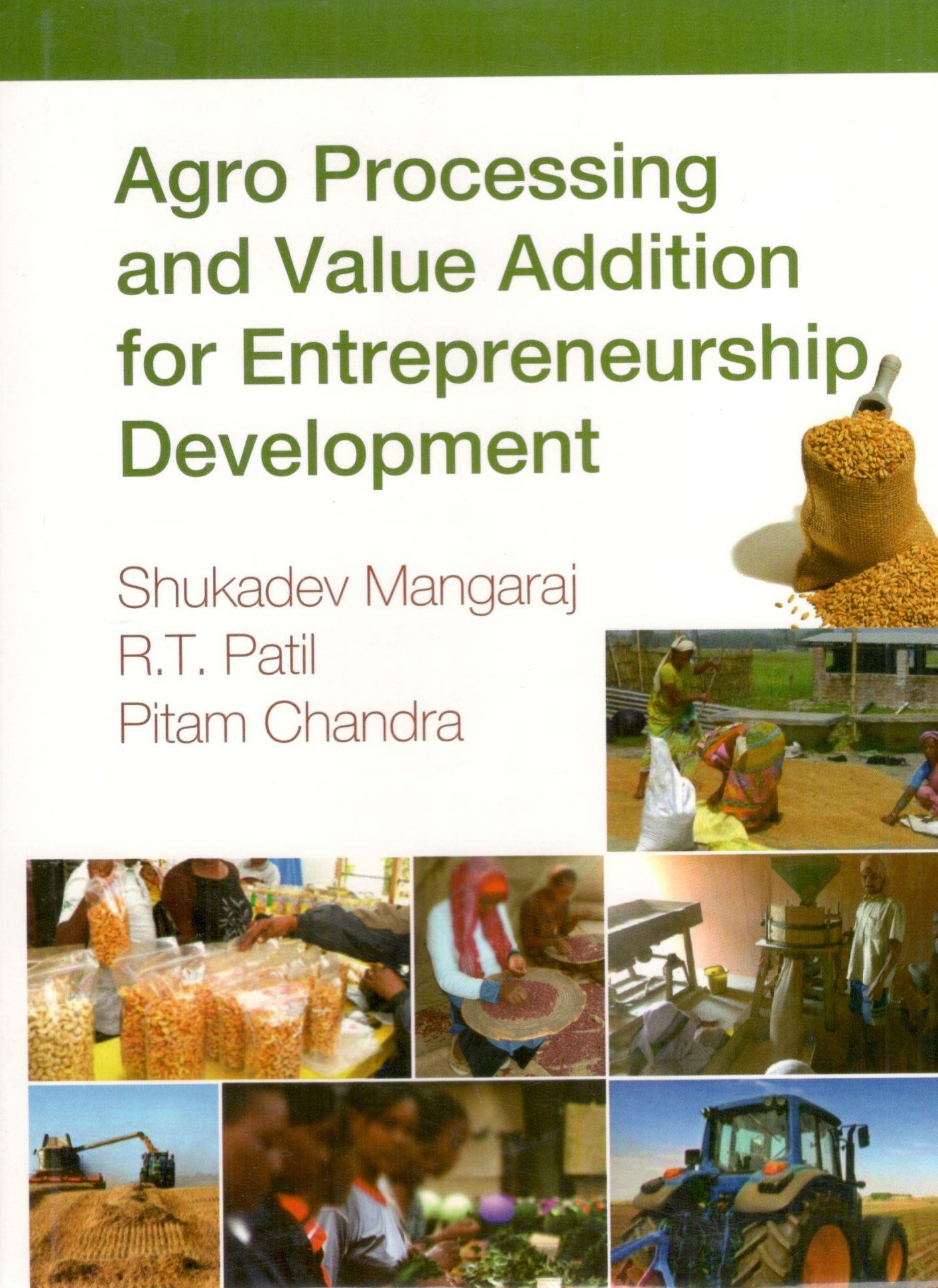 The book contains knowledge and skills on the basic steps to develop organize and manage an agro processing business venture along with any of its risks in order to make a profit. Entrepreneurial spirit is characterized by innovation and risk-taking, and is an essential component of a nation’s ability to succeed in an ever changing and increasingly competitive global marketplace. The promotion of value addition in the agricultural sector through agro-processing activities is generally reckoned to be one of the most efficient policies that can be enforced to achieve sustainable economic growth. Investments in agro-processing are known to have significant multiplier effects, due to the forward and backward linkages in the productive chains of the sector. The benefits of agro processing business are employment generation, higher income, value addition, improvement in food product quality, nutritional security and the possibility of efficient operation at least on small scales. Considering the need of the hour it was felt to bring out a publication on agro processing for entrepreneurship development. Various resource persons across the nation were contacted and requested to provide write up on agro processing and related area that would lead to entrepreneurship expansion. The chapters were compiled and edited to suit the purpose of the publication. The book discusses about the basic concepts of establishing agro processing industry, technology used in the food processing, equipment involved the establishment of agro processing centre, different crops available for taking up agro processing activities and value addition, financial feasibility and the profits that can be gained from the activities. It is useful to students, instructors, researchers, food processing industry personnel, policy maker and to all those who are interested in entrepreneurship development from agricultural processing and allied sectors.

Dr. R.T. Patil obtained B. Tech. (Agri. Engg.) degree with gold medal from MPAU Rahuri in 1977, followed by M. Tech. with distinction from Indian Institute of Technology, Kharagpur in 1979 and PhD from University of Saskatchewan, Canada with a best thesis award from Canadian Society of Agricultural Engineers in year 1995. He completed 2 years Post Doctoral Fellowship from Washington State University, Pullman USA. He has developed 23 research prototypes, 7 process protocols and 7 pilot plants with 150 published papers in national and international journals, 50 technical proceedings and over 100 important presentations in National and International Seminars. He served as Director (PFE) ISAE for two years and as Vice President (ISAE) for 6 years and Vice President of Association of Food Scientists and Technologists (India) for one term. He is recipient of team award from Government of Poland for his contribution to thermal processing of biomaterials in 1996 and Eminent Engineers Award of Institution of Engineers (India) in year 2011. He has contributed two US Patents and seven Indian patents. His projects have received the funding from NSERC (Canada), NATP (World Bank), USADPLC (USA), WSPC (USA), WSU-Impact Center (USA). He is a Member of 6 professional societies and elected Fellow of Institution of Engineers (India), Kolkata, Indian Society of Agricultural Engineers and National Academy of Agricultural Sciences. He received team award from Indian Society of Agricultural Engineers for development of pomegranate aril extractor in 2011. He was invited to speak in international conferences in Brazil, Canada, Turkey, Afghanistan, and Malaysia. He was appointed Chairman of Food & Agriculture Division 16 committee for BIS, Government of India. He had successfully handled Jai Vigyan Mission Project component on post harvest and management and value addition during 2000-2003 which was rated as star project by reviewing authority. He steered the growth of CIPHET as Director during 2006-2011. During his tenure institute reached un-scalable height and developed 17 novel technologies, 16 patents, 320-refereed papers in reputed journals and 76 EDPs for food processing at production catchment and brought the institute to national and international repute. He offered the direction to post harvest management and value addition research in India through a team of 40 scientists at CIPHET and two All India Coordinated Research Projects having 49 centres throughout the country. Presently the is holding the post of the Director, Technocrat Institute of Technology, All India Council of Technical Education approved institute affiliated to Rajiv Gandhi Technological University, Bhopal.

Dr. Pitam Chandra, Director, Central Institute of Agricultural Engineering (CIAE), Bhopal received his B.Tech (Agril. Engg.) from GB Pant University of Agriculture and Technology in 1974. Dr. Chandra earned his MS from University of Manitoba (Canada) and Ph.D. from Cornell University (USA). He was post-doctoral research associate at North Carolina State University before returning to India in 1980. Before taking over as Director, CIAE Dr. Chandra had been a researcher and a teacher. He is called as the father of present-day greenhouse technology in India. He is also recognized for establishing the first Phytotron facility at Indian Agricultural Research Institute, New Delhi. He has served on several professional committees and has been a member of teams leading to the development of national institutions and programmes. Dr. Chandra has about 250 publications to his credit. He is a recipient of several national and international awards for his R&D efforts in the area of protected cultivation including the Rafi Ahmed Kidwai Award of ICAR. He is Fellow of the Institution of Engineers (India) and Indian Society of Agricultural Engineers. Besides, he is member of several Indian and International Professional Societies