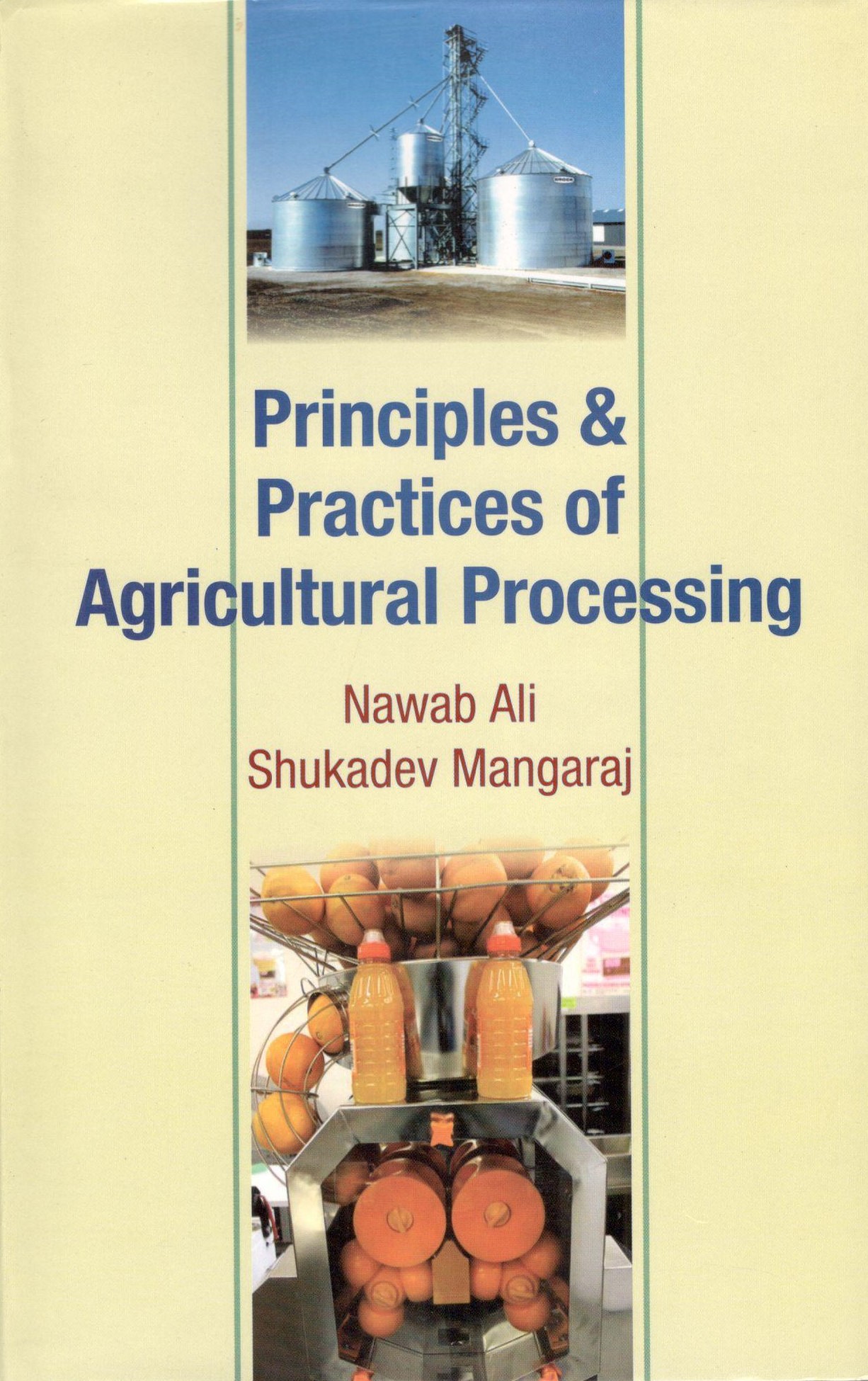 The book describes various principles and practices involved in processing and utilization of agricultural and livestock’s produces for food, feed and other uses. It gives details of sequences starting from harvesting at an optimum stage of physiological maturity till its processing and utilization, including that of crop residues, wastes and processing by- products from field crops and horticultural & livestock produces. Various unit operations have been described in details. Processing and utilization of grains (cereals, pulses and oilseeds), horticultural crops (fruits, vegetables, flowers), livestock produces (milk, meat, chicken, egg and fishes); spices & condiments; aromatic & medicinal plants; miscellaneous crops (fibre, resins & gums, tea, coffee, cocoa, opium) have been covered. A chapter on sustainable agriculture for food and nutritional security of the ever growing Indian & Global population under the dwindling land & water resources and another one on food metabolism and diet design, for the benefits of the readers have been included. A glossary of various terms & terminology used in agricultural and livestock produce processing has been given. In all, there are 13 chapters and five appendices giving some relevant and useful information on processing and utilization of harvested biomass of plant & animal origin. Some useful tips on as to how to become a fit and relaxed person for a better living, health, happiness and longevity have been added in the appendix. A subject index has also been given at the end of the book. It is written and presented in a way so that it can serve as a text and/or a reference book, too. Hope that the readers would find it extremely usefull and the knowledge & skill embodied in the book would help them to do better in all spheres of life as healthy foods make healthy body & mind and leads towards a better livelihood and happy-living.

Dr. Nawab Ali, born on 1st January, 1947, has had his last appointment as Deputy Director General (Engg.), Indian Council of Agricultural Research (ICAR), New Delhi since April 11, 2005 and superannuated on December 31, 2008. Dr. Ali received his B. Sc. (Agril. Engg) from Allahabad Agricultural Institute, Allahabad in 1968 and both M. Tech and PhD degrees from IIT, Kharagpur in 1970 and 1975 respectively. He started his career at IIT, Kharagpur in 1974. After serving IIT for about 4.7 years, he joined the Central Institute of Agricultural Engineering (CIAE), Bhopal in October 1978 and later on he served CIAE as the Head of Post Harvest Engineering Division and Project Coordinator of the All India Coordinated Research Project on Post-Harvest Technology. In November 1986, Dr. Ali was appointed as the Project Director of Soybean Processing & Utilization (SPU) Project at CIAE, Bhopal. Dr. Ali also worked as Director Incharge of the Central Institute of Post-Harvest Engineering and Technology, Ludhiana (1989-91) and the Indian Lac Research Institute, Ranchi (1993). Dr. Ali served as the Director, CIAE, Bhopal during November 11, 2002 to 10th April, 2005. Dr. Ali was awarded the Jawaharlal Nehru Award of ICAR for an outstanding Post-Graduate Research in Agriculture in 1977 and the Commendation Medals of India Society of Agricultural Engineers in 1985 and 1998 for his significant contribution in Post Harvest Engineering and distinguished services to the Society. He was also awarded the ISAE Gold Medal in 2002. Dr. Ali served the ISAE as its President during 2006-08. He is a Fellow of ISAE. He is also a life member of Association of Food Scientists and Technologists (India) and the Nutritional Society of India. Dr. Ali has about 35 years of research and research management experience in agricultural engineering and published more than 200 papers.

Dr. Shukadev Mangaraj was born on 18 June 1975 at Mamia, in the District of Bolangir, Odisha, India. He passed the high school and Intermediate examination from Govt. Boys High School, Kantabanji, and B.J.B College, Bhubaneswar, with 1st division (distinction) in the year 1990 and 1992, respectively. He graduated in B. Tech. (Agricultural Engineering) from Odisha University of Agriculture and Technology, Bhubaneswar in 1996 with 1st division. He qualified for the ICAR, Junior Research Fellowship (JRF), subsequently studied at Indian Agricultural Research Institute, New Delhi and received Master degree (Agricultural Engineering, specialization in Agricultural Structures and Process Engineering (AS&PE)) with 1st division (distinction) in 1998. He was selected for Agricultural Research Service in the discipline of AS&PE in the 1998 ARS batch. The author received Ph.D. degree from Indian Institute of Technology, Kharagpur. He is presently working as Senior Scientist (AS&PE) at Central Institute of Agricultural Engineering, Bhopal. He is a life member of the Indian Society of Agricultural Engineers (ISAE). He has worked in twelve research projects, developed nine prototypes, published 60 research papers in peer-reviewed journal, four books, and twenty one book chapters. He has been conferred with NAAS ASSOCIATE (2014) by the National Academy of Agricultural Sciences, New Delhi; received ISAE Commendation Award (2011) for outstanding contributions in the field of Post Harvest Engineering and Technology; Best Citizens of India Award (2012) in recognition of exceptional caliber and outstanding performance in the area of Agricultural Structures and Process Engineering from International Publishing House New Delhi, India; Rastriya Gaurav Award (2014) and Bharat Jyoti Award (2011) for meritorious services, outstanding performance and remarkable role in the field of research and development from India International Friendship Society , New Delhi. He has Received four best poster presentation awards on his research work given by various forum namely ISAE, New Delhi, AFSTI, Mysore; IICPT (Ministry of Food Processing Industry) etc. He has Conferred with N.N. Mohan Memorial Award (2009) from ‘All India Food Processors’ Association’, New Delhi.