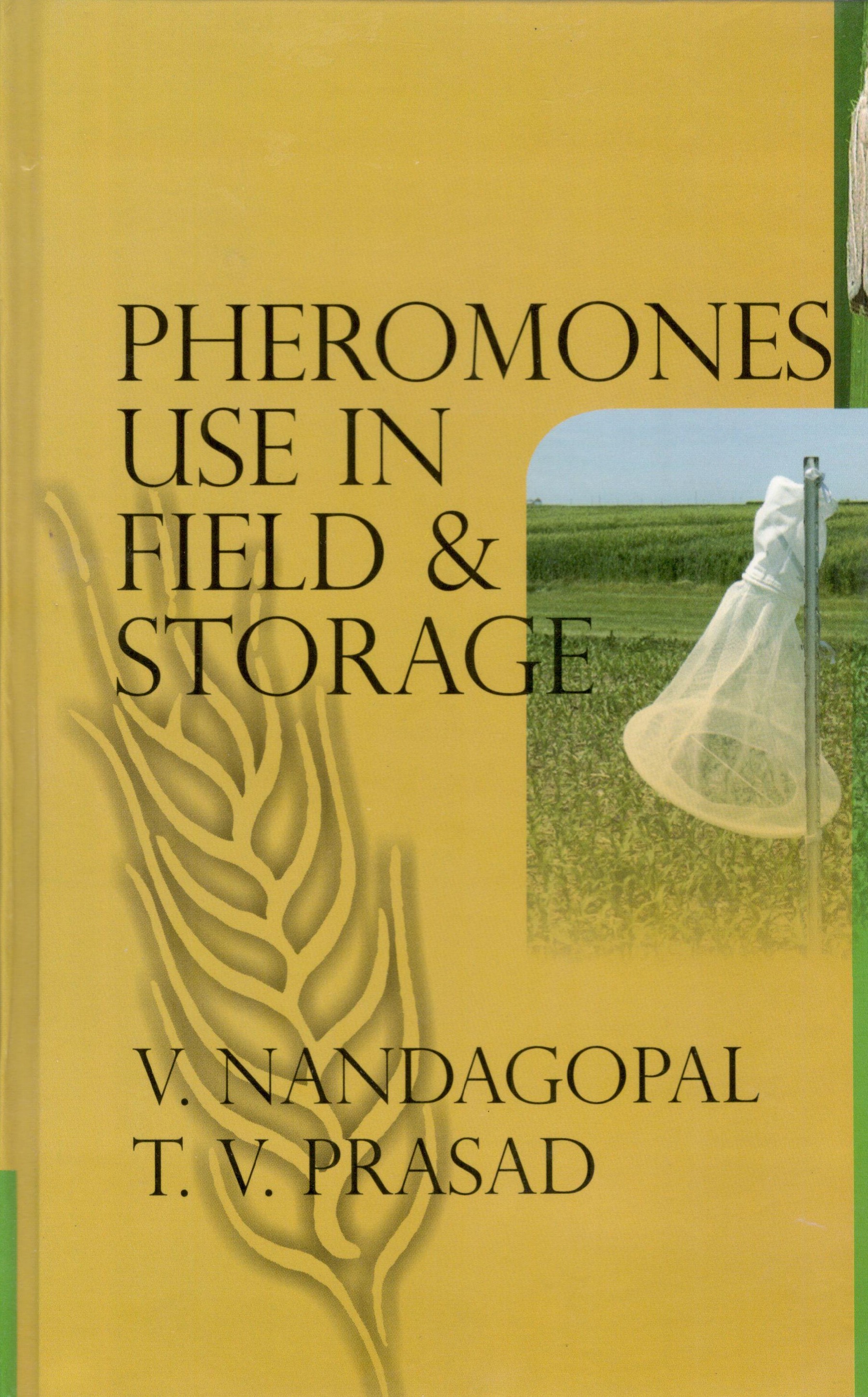 Pheromones Use In Field & Storage

This book entitled “Pheromones Use in Field and Storage” is aimed at providing handy reference guide for the researchers, extension officials, teachers and students of Entomology who are indenting to specialize in pheromone research and technology. This book contains chapters contributed by experienced scientists in pheromone technology. It contains the work done in the field of pheromone basic research in labs and their field testing, efficiency and suitable for field use which helps the farmers to avoid synthetic pesticides to appreciable level. The first chapter deals with the work done in the field of pheromone research traced from the early period of pheromone research in India. There is a separate chapter on the instrumentation and isolation of pheromones. This book also contains chapters covering on the practical use pheromone technology for the management of insect pests of legumes, rice, groundnut, oil palm, palm, coffee, banana, sugarcane, potato, cotton, brinjal and storage. The chapters include the findings of various experiments conducted over the years at different locations. Most of the information was pooled and presented in tabular form in a comprehensive and lucid manner for easy understanding. The need for editing the book on pheromones use in field and storage was felt to cater the needs of persons who are directly or indirectly involved in the promotion and use of pheromone technology.

Dr.V.Nandagopal, did his B.Sc (Ag) and M.Sc (Ag) in Agrl. Entomology from the Agricultural University, Madurai, Tamil Nadu. He did a thesis for his Ph.D on pheromone in collaboration with Natural Resource Institute, London. He has got specialization on pheromone research under Dr.H.David, the HOD of Plant Protection, Sugarcane Breeding Institute, Coimbatore. He has contributed pheromone research in sugarcane, groundnut and rice crops. He has published/edited 6 books in these crops. His research findings have been published in National and International journals.

Dr. T.V. Prasad, is presently working as Senior Scientist (Entomology) at National Bureau of Plant Genetic Resources (NBPGR), New Delhi. Dr. Prasad did his schooling at Sainik School Korukonda, Vizianagaram, Andhra Pradesh and went for graduation at Agricultural College, Naira, ANGRAU. He has passed B. Sc. (Ag.) in first class with distinction in 1996. Thereafter, he did his M. Sc. (Ag.) from College of Agriculture, Bapatla, ANGRAU and Ph.D. from Indian Agricultural Research Institute (IARI), New Delhi. During this period, he earned various scholarships and fellowships to support his education. He stood first in All India entrance examination for Agricultural Research Service (ICAR) in Entomology and in 2003 joined as Scientist, (Entomology) at Directorate of Groundnut Research (DGR) (formerly known as National Research Centre for .Groundnut), Junagadh, Gujarat. During his 6 years of tenure in research and extension at DGR, he has specialized in Integrated Pest Management (IPM) in groundnut based production system and pheromone technology. He was conferred Young Scientist Award for the year 2010 by the Applied Zoologists Research Association (AZRA), Cuttack. He is life member of several scientific societies in the field of Entomology and plant protection and also associated with several journals as referee. He was visiting Norman E. Borlaug fellow to Department of Grain Science and Industry, Kansas State University, USA, under Indo-US Norman E. Borlaug International Agricultural Science and Technology Fellowship Program 2008 of USDA’s Foreign Agricultural Service USA under Indo-US Agricultural Knowledge Initiative (AKI). He has a number of national and international publications to his credit. He has written fifteen book chapters and six books. He is now continuing his research on evaluation of plant genetic resources against insect pests with a strong flair for host plant resistance.