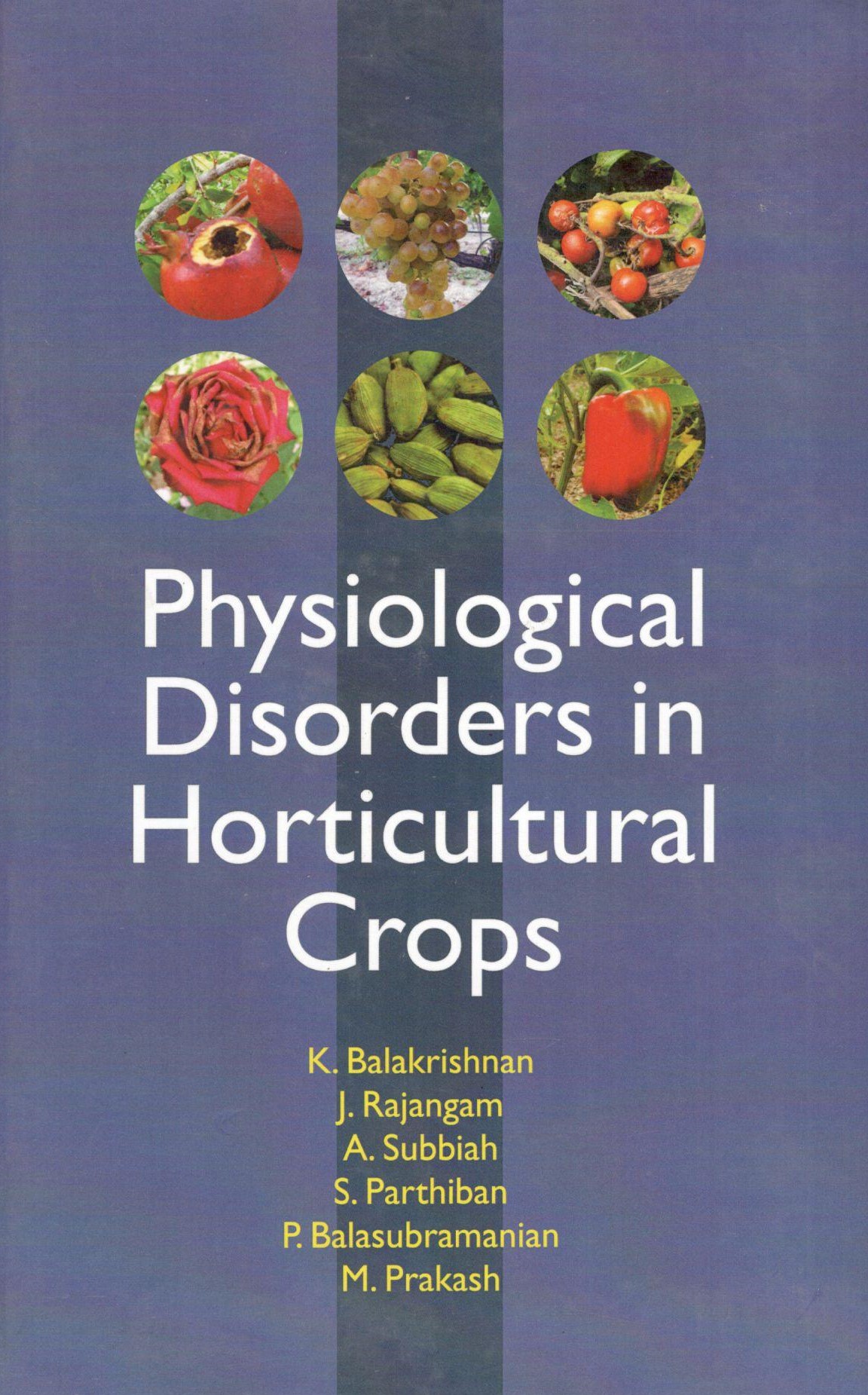 The publication entitled "Physiological Disorders in Horticultural Crops" gives a comprehensive over-view of cause, symptoms and remedial measures of different physiological disorders in fruits, vegetables, flowers, spices and plantation crops. The book contains new technological information as well as practical knowledge about the disorders of important horticultural crops and their management. The book will serve as a useful guide for students, scientists, extension workers, farmers and others associated with the discipline of Horticulture.

Dr. K. Balakrishnan is presently working as a Professor of Crop Physiology at Agricultural College and Research Institute, Madurai. He was the recipient of ICAR Senior Fellowship during 1983 and obtained Ph.D in Crop Physiology in 1987 from Tamil Nadu Agricultural University, Coimbatore (TNAU). He has also obtained Post Graduate Diploma in Journalism in 1988. He also worked in United Planter's Association of South India, Coonoor, Nilgris, Tamil Nadu. He has been teaching courses on Crop Physiology and Biochemistry to the Under Graduate and Post Graduate students in both Agriculture and Horticulture for the past 32 years. He served as Principle Investigator of Foliar diagnosis in Horticultural crops in plan scheme funded by Government of Tamil Nadu, Post Harvest Technology of Horticultural crops ICAR-PHT at Horticultural College and Research Institute, Periyakulam and Arid zone fruit crops funded by AICRIP (ICAR), at Regional Agricultural Research Station, Aruppukkottai. He operated several schemes from both private and Government agencies. He also worked as Assistant plant physiologist in ICAR-Tropical fruit crops, AICRIP, Horticultural College, Coimbatore. He was the member of All India ICAR Syllabus Committee on basic Agricultural sciences during 2007-2008. He also served as a member of Board of studies, Tamil Nadu Agricultural University during 1997-2000. His expertise in foliar diagnosis of nutritional disorders in crop plants is well recognized by invitation to deliver lectures on various aspects of diagnosis of nutritional and physiological disorders in NGOs, Extension officials and farmer's organisations. He has solved many physiological field problems. He has authored and co-authored 10 book chapters and 6 books and published 60 research papers in both national and International journals, 3 extension bulletins and 120 popular articles. He has been the question setter and external examiner for M.Sc.(Ag.) and Ph.D thesis in several Universities. He has organized one national seminar at AC&RI, Madurai during September 2013. He served as the Professor and Head, Department of Seed Science and Technology, Agricultural College and Research Institute, Madurai during 2013-2015. Recognition of his 25 years of meritorious service, TNAU award given on 41st foundation day celebration held on June 01, 2011. He was awarded Thiruvalluvar Award for his contribution in Teaching Crop Physiology courses to the under graduate students in Agriculture by Alumni Association of Agricultural College and Research Institute, Killikulam in 2017. He has been awarded Fellow of Bose Science Society (FBSS) by the Tamil Nadu scientific Research Organization, Tamil Nadu during January 2018.

Dr. J. Rajangam, started his career as an Asst. Professor (Horticulture) in the year 1995 at Tamil Nadu Agricultural University (TNAU), Coimbatore. As a Horticulturist, he has more than 20 years experience in various horticultural crops. During his service, significant contributions were made pertaining to release of varieties CO 3 Chillies, PKM 2 Annual moringa and PKM 1 Davana. He served as Professor and Head, Horticultural Research Station, Kodaikanal for a period of four years. During his tenure, he was officer-incharge of All India Network Project on Temperate Fruit Crops at Horticultural Research Station, Kodaikanal with CITH, Srinagar and PI of ICAR - AICRP (Fruits) at Horticultural College & Research Institute, Periyakulam. He got rich experience is teaching UG and PG courses for more than 16 years and guided 12 M. Sc (Hort.) students. He has published more than 30 papers in National and International journals, 112 popular articles, 15 booklets and two books. He has visited Israel and Tanzania for Post Graduate Certificate Programme in Protected Horticulture and International Symposium on Moringa cultivation and utilization. Currently, he is serving as the Professor and Head, Department of Fruits, Horticultural College and Research Institute, Periyakulam (TNAU), Coimbatore.

Dr. A. Subbiah is presently working as an Assistant Professor of Horticulture at Grapes Research Station, (TNAU), Theni, Tamil Nadu. He was the recipient of ICAR Junior Research Fellowship for his Master Degree during 1997 and completed his Ph.D., in 2004 from Tamil Nadu Agricultural University, Coimbatore. He also worked as Research Assistant at Cardamom Research Station, Pampadumpara, Idukki, Kerala (KAU), Senior Research Fellow at Department of Vegetable Crops, TNAU, Coimbatore and Technical Executive of Indian Spices Producers Company, Cochin, Kerala. He has also been involved in teaching courses on fundamentals of horticulture, production and postharvest technology of fruits to the Under Graduate students in Horticulture for the past 10 years. He also served as Co-Principle Investigator in the ICAR-NICRA Research Project on "Studies on Mango Flowering Phenology" and IDRC-CIFSF, Canada funded Project on ''Enhanced Preservation of Fruits in Asia by using Nano Film Techniques''. Further, he is also In-Charge of Venture Capital Scheme ''Mass multiplication of grape rootstocks and varieties. He was associated with 10 various scientific societies involved in promotion of research and development in the field of fruits, spices and plantation crops as life member. He also served as a member of Board of Studies for UG Programme in Horticulture, Tamil Nadu Agricultural University during 2010-2013. He has authored and co-authored 4 book chapters and 6 books and published 23 research papers in reputed National and International Journals. He has been the question setter for B.Sc. (Hort.) Programme of UHS, Bagalkot. He was the organizer of various training programme related to production technology of mango, grapes and About the Authors / vi banana for the benefit of farming community. He is currently involved in research activities related crop improvement and canopy management in grapes.

Dr. S. Parthiban is working as Professor and Head, Grapes Research Station, Royappanpatty, Theni District, Tamil Nadu. He has assembled 120 grapes varieties and distributed 2.0 lakhs Dogridge rootstocks to grapes growers. He worked in Coffee Board scheme and ICAR-AICRP on Floriculture Scheme at Horticultural Research Station, Yercaud. He was the Officer-in-charge for the scheme ICARAICRP on Tropical Fruits at Horticultural College and Research Institute, Periyakulam for 8 years and specialized in research on sapota, acid lime and jackfruit. He was one of the scientists responsible for the release of new crop varieties viz., PKM-4 and PKM-5 sapota, PKM-1 Manila tamarind, PKM-1 Dharna and two technologies in mango. He also worked as Professor and Head at Horticultural Research Station, Thadiyankudisai and carried out research on coffee, hill banana, avocado, mandarin orange, pepper, cinnamon, nutmeg and litchi. He underwent 15 days training programme on "Experiential Learning" at University of Western Sydney, Australia during 1996. He served as member, Board of Studies, Tamil Nadu Agricultural University during 1996- 2001. He was the approved question paper setter and evaluator for B.Sc. (Ag.) & M.Sc. (Ag.) courses in Annamalai University, Agri-UG & PG diploma courses in Gandhigram Deemed University and approved external examiner at Dharwad Agricutural University. He also served as NSS officer for three years, Professor (Farms) for seven years and Professor and Head, Department of Vegetable Crops at Horticultural College and Research Institute, Periyakulam. He has 16 years of teaching experience and handled several courses for B.Sc. (Hort.) and M.Sc., (Hort.) students. He has guided 15 M.Sc. (Hort.) and 4 Ph.D. (Hort.) students. He has authored 14 book chapters and 7 books and published 42 research papers.

Dr. P. Balasubramanian started his career as an Assistant Professor in Horticulture, in the year 2009 at TNAU, Coimbatore. As a horticulturist he has more than 9 years Research experience in various horticultural crops. During his service, significant contributions were made pertaining to the release of varieties MDU-1 cluster beans. He served as a Farm Manager at Soil and Water Management Research Institute, Thanjavur and also at the department of Horticulture, Agricultural College and Research Institute, Madurai for a period of 7 years. He is a principal investigator of BRNS-GOI, Mumbai scheme entitled "Isolation of short statured early maturing mutant in cluster bean through gamma irradiation (Cyamposis tetragonoloba L.") with a budget of 24.11 Lakhs. He is offering courses in Horticulture for more than 7 years for U.G, P.G, Ph.D students in Agricultural and Horticulture and also guided 2 M.Sc. and 1 Ph.D. He has published 13 Research articles in peer reviewed national and international journals.

Professor M. Prakash born in 1966, obtained his B.Sc.(Ag.) and M.Sc.(Ag.) from Tamil Nadu Agricultural University, Coimbatore, India in 1988 and 1990 respectively. He did his Ph.D from Annamalai University. His studious and scholarly aptitude during his studenthood fetched him prestigious student support awards like National Merit Scholarship, Government of India during 1981-1988 and ICAR Junior Fellowship during 1988-1990. Prof. M. Prakash is working on abiotic stress tolerance from his post graduation onwards. He started working on effect of antitranspirants on growth and physiology of brinjal and continuing his work on abiotic stress tolerance till date. He is having 25 years of teaching and research experience in the Department of Genetics and Plant Breeding wherein he has guided 8 Ph. D. and 22 Masters Degree Programmes. He has also completed five funded research projects. He is presently serving as a Professor, Department of Genetics and Plant Breeding, Faculty of Agriculture, Annamalai University. He has earned the status of Departmental Research Support with Special Assistance Programme of University Grants Commission (UGC-SAP- DRS) to the Department with financial assistance of Rs. 50 lakhs at Phase I (2009-2014) and Rs. 1.025 Crore at phase II (2015-2020) level. His credentials include publications of 85 referred research papers, seven books published by National publishers, three books published by International publishers and one book chapter published in SESAME by globally reputed CRC Press. He has significantly contributed in knowledge sharing, through organisation of 7 National Seminars, participation in 8 International Seminars, Conferences and Workshops and 18 National Seminars and Conferences. His expertise in abiotic stress tolerance is well recognised by invitations to serve in the Editorial Board / Committees of several academic journals, awards like Crop Research Award in 2004 and Best Researcher Award in Annamalai University in 2010 and Fellowships like FELLOW of Indian Society of Plant Physiology, New Delhi in 2015 (FISPP), FELLOW of Association for the Advancement of Biodiversity Science, Bangalore in 2015 (FABSC) and FELLOW of National Academy of Biological Sciences (NABS), Chennai in 2016(FNABS).